Holaspirit was built to be fully customization, allowing nearly everything to be changed so you can use it regardless of what "method" of structuring your organization uses. HolaSpirit was built to be fully customizable. Whether your organization is practicing Holacracy, Sociocracy, or any other framework with its own rules, you will be able to set the rules and parameters for it to work!

Of course, Holaspirit was inspired in the practice of Holacracy. But the platform is now the most flexible and adaptable in the market for any particular case. We understand that one size does not fit all! Anyway, you will find some concepts that are from Holacracy and this article will help you understand them better.

According to Wikipedia, Holacracy is a "system of organizational governance in which authority and decision-making are distributed throughout a holarchy of self-organizing teams rather than being vested in a management hierarchy".

Holacracy is described in a set of rules, the Holacracy Constitution.

Holacracy is a registered trademark owned by HolacracyOne LLC.

While there are many different features within holaSpirit, not every single one is only from the holacratic framework. You will find the most commonly used tools in the market. Since you likely know those and they are not specific to Holaspirit or Holacracy (such as projects and OKRs), we won't mention them here. Instead, we'll just point out the things that may be unknown to you.

Chart: Here, you can view your organization as a "holarchy". It is the same hierarchy you've always known (a top-down structure), it just looks a little different.

Role: is a function in an organization. Traditional companies use a single, full-time role (namely: a traditional job) filled by one person. Whereas other companies may have employees filling different roles.

Circles: These are teams of roles. When a function becomes too complex it might need more than a role to accomplish it. A circle then, team up different roles inside of it to accomplish such a function.

Tensions: A "tension" is the perception of a problem or an opportunity of improvement. It can be an issue with your job, a policy you think needs changed, lack of clarity on a process, changing the color of the webpage - anything at all. This section lets you write down what your tensions are so you can get them treated by the organization. 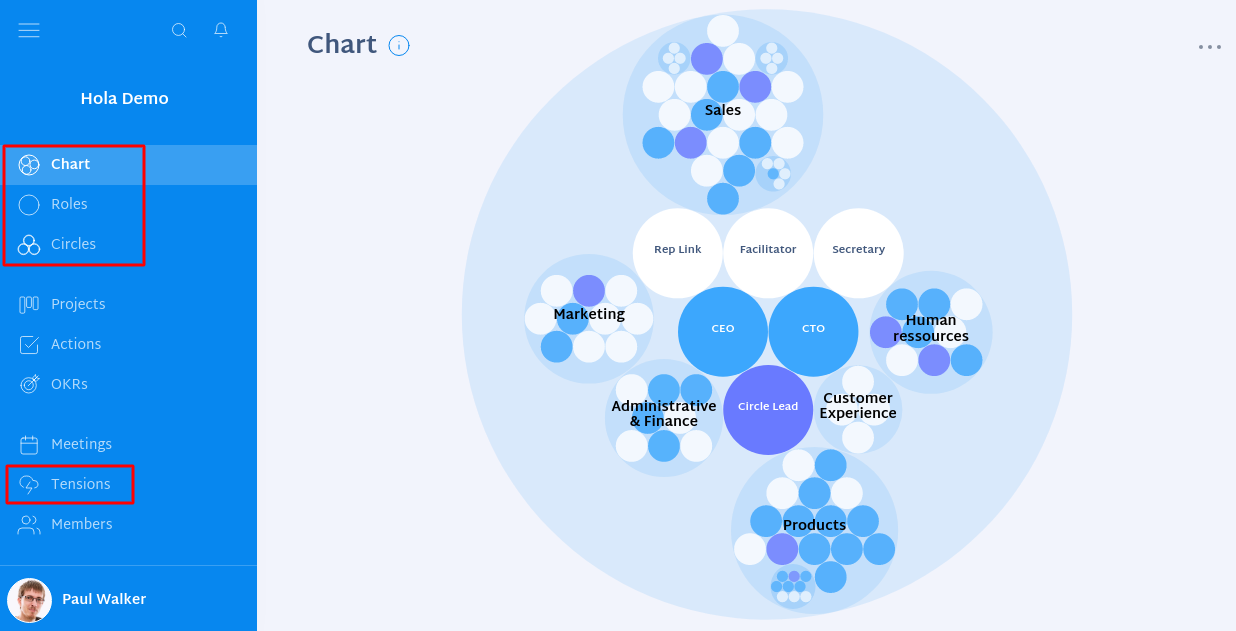 Metrics: Statistics that members should report on during team meetings. Should be relevant to measure the accomplishments of objectives.

Checklists: Either habits you want to help your team build or things you want to know whether or not they were done. These can usually be reported with a simple yes or no. For example, "Did you submit all weekly reports that were due?" or "Gave praise to a fellow employee who did good work." 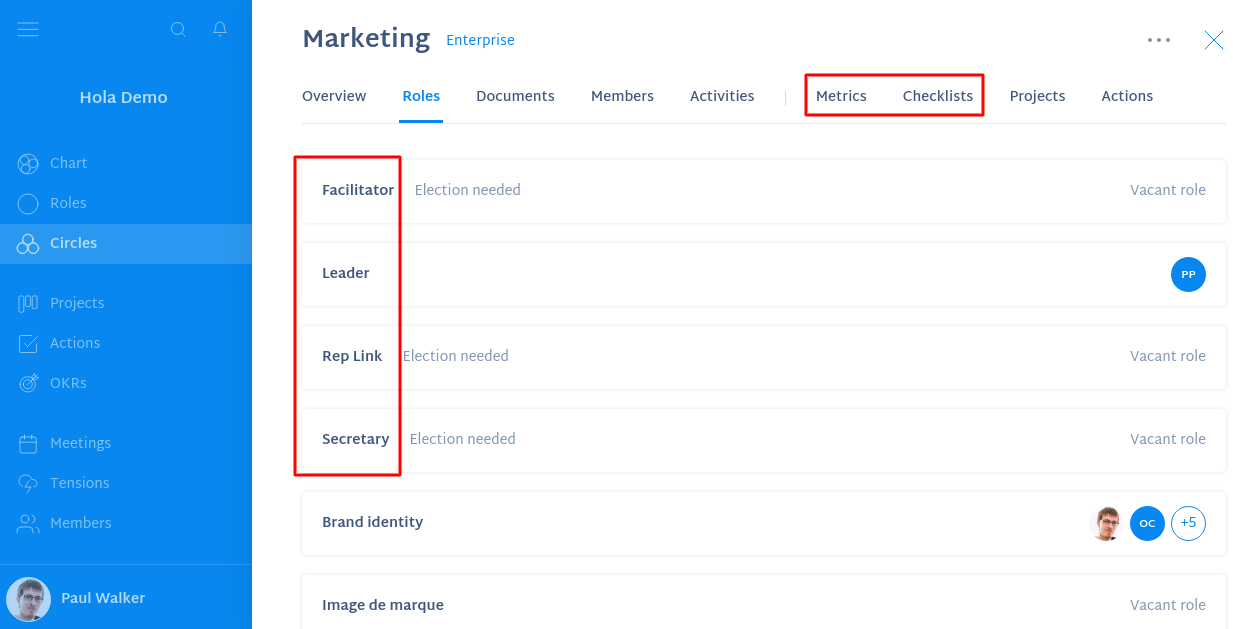 You may also see four roles listed in every circle. You can read more about these "core roles" in this article, but below is the overly simplified version of how they are set up by default. It's important to remember these are automatically created, but fully customizable, so you can delete or change them however fits best for your organization. 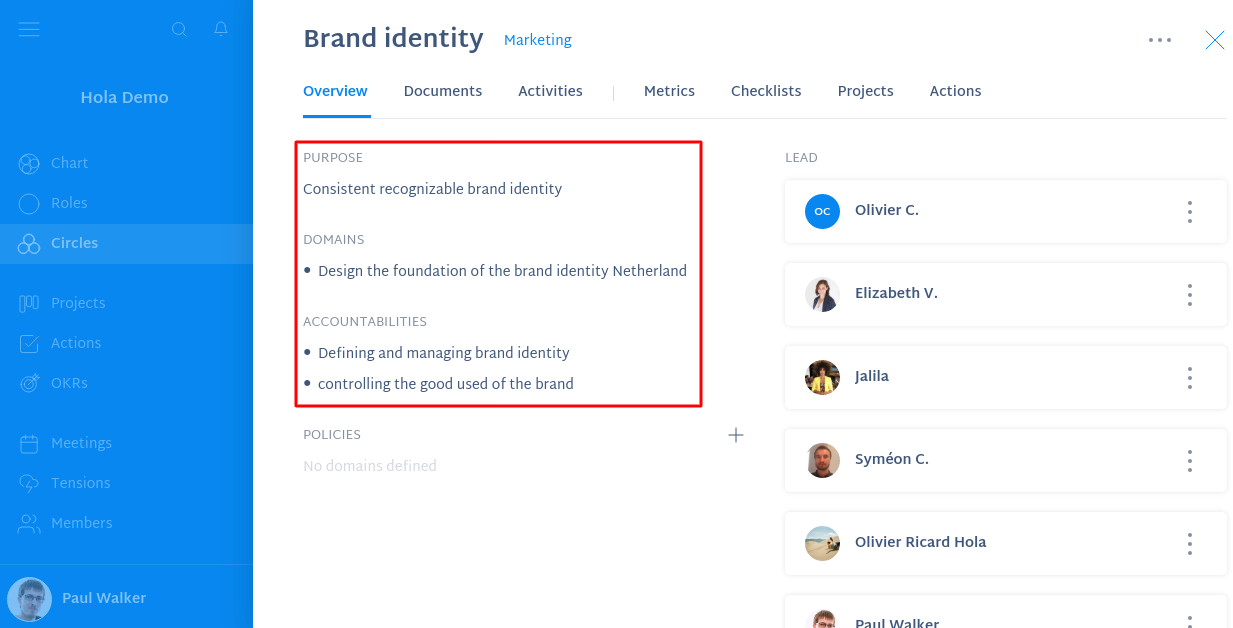 Purpose: The "goal" or "mission statement" for a team (circle) or job (role).

Domains: A decision, process, or piece of equipment that is "owned" by this role. Just like you own your car, the person(s) in this role own any decisions based on what they have domain over.

Accountabilities: These are expectations about the role. Things you are accountable for doing in this role but are not exclusive. Some other role in the organization can make actions on other accountabilities. 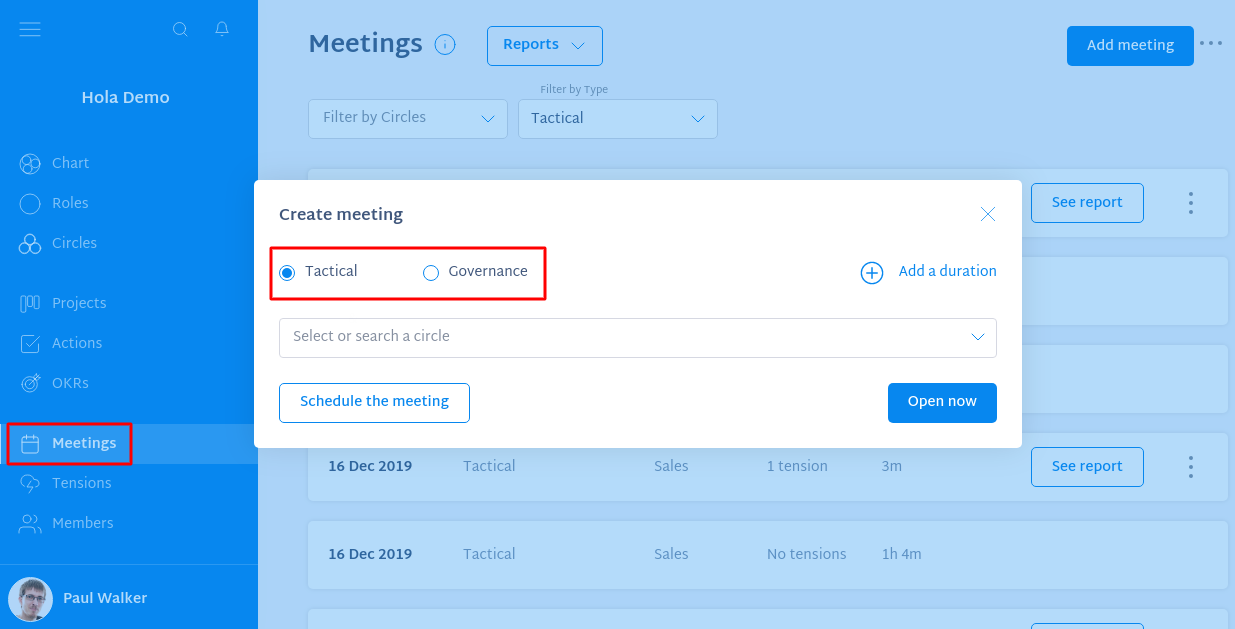 Meetings: You will have the option to join or open a Tactical meeting or a Governance meeting. Both are based on the practice of Holacracy. While holaSpirit provides a default process for these meetings, you can customize the meeting processes however works best for you.