More about roles and how they structure your organization.

Roles are the building blocks of your organization. They are defined by a purpose, a set of accountabilities, and the members within it. Holaspirit supports a new way of defining responsibilities and getting work done: work is not divided among people but among roles.

The importance of clearly defined Roles

Take a look at the Roles

The different types of Roles

Roles in an evolving organization

What can a Role holder do?

Why should you have clearly defined Roles and responsibilities within your organization?

Defining the roles and responsibilities for members in your organization is crucial for several reasons:

To start with, there 3 three things that every member of an organization must be aware of:

It is possible for an individual to have one or multiple roles at the same time, depending on what they do. Also, a single role can be filled by multiple individuals.

The first step is simple : look at what you have and work out what you need. This can be done by making a straightforward list of the people in your organisation. Then create a second list detailing the roles and tasks your organisation need to be achieved to . You’ll see where you have an extra or shortfall of expertise and create positions you might realize are needed, while removing those that your organization no longer really requires. You can draft a first version of your organization chart on Holaspirit to see how the different teams of the organization are connected or interrelated.

A transparent structure will serve as a way to get started, helping to highlight issues which may not have been as obvious before.

👉 Read more about organizing your team with roles.

Now, think of the role information as your guide or map. For both the role holder and the member(s) they report to, this gives the direction to follow to pursue the purpose of the organization.

On a role page, you'll find information such as their: 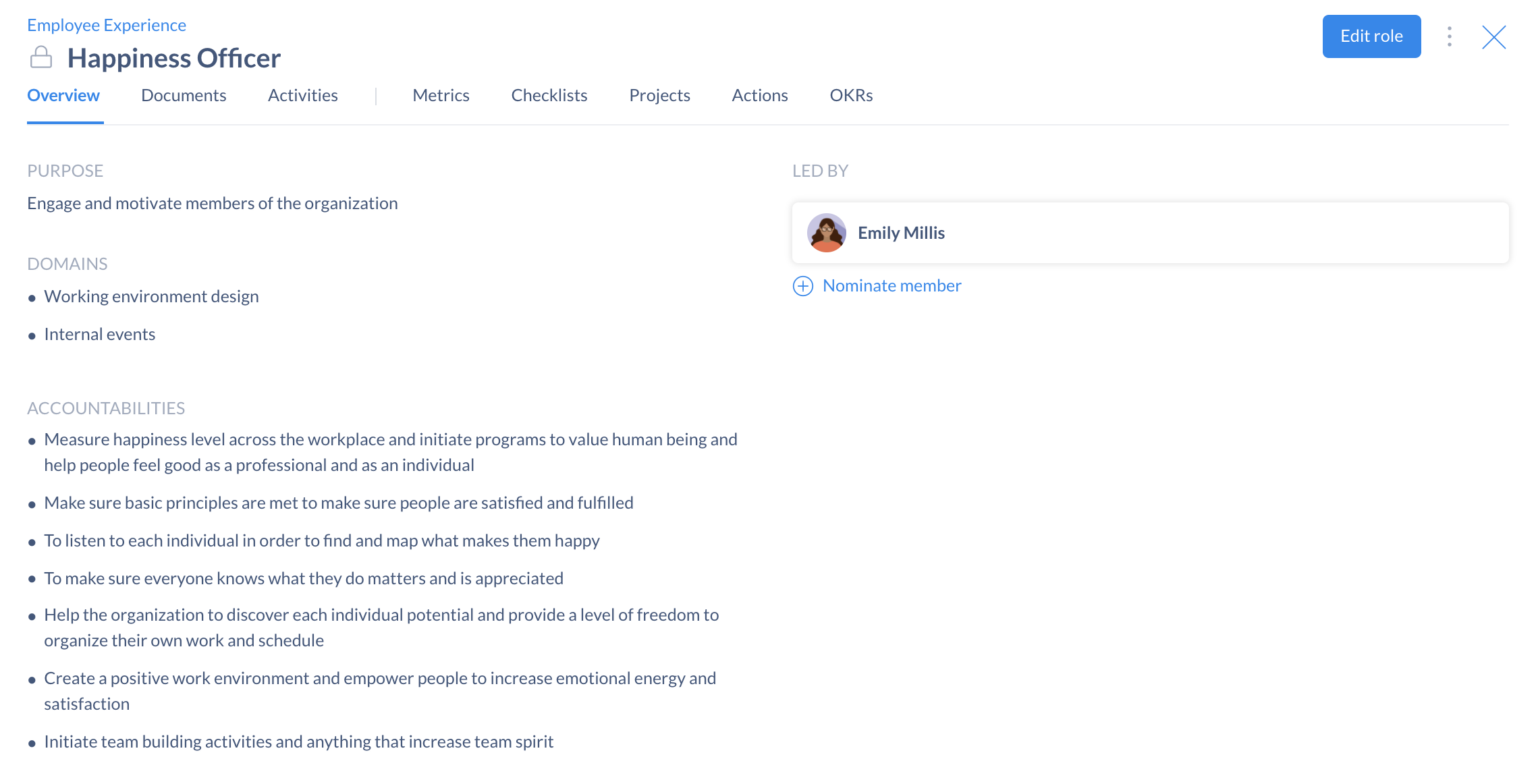 Take a look at the Roles

There is no point in defining the roles and their responsibilities if the people are not aware of them. Each employee should be clearly made aware of what is expected of them. This is where Holaspirit comes handy.

People get easy access to their own roles and those of the entire organization. They can navigate the Governance app, looking into the Roles section or the organization chart to find the information they need.

The different types of Roles

👉 Read more about how to assign someone to a Role.

👉 Read more about how to manage Elected roles.

Roles in an evolving organization

A role is dynamic and evolves to the organization’s needs meaning they are updated regularly in order to adapt to the ever-changing environment they're in.

An organizational change can take many forms. It may involve a change in the company structure, strategy, policies... On Holaspirit, these are referred to as Governance changes.

👉 Read more about how to create, submit and track Proposals.

What can a Role holder do?

As a Role holder, you have the full authority to take any next action you feel is right to fulfill the Purpose of your Role. However, you are not allowed to have an impact on a Domain owned by another Role, unless you are authorized to do so by a Policy.

You can easily see the authority of a role and quickly identify if you are in a position to make a decision. As a role holder and core circle member, you can:

How to add a role?

How to edit a role?

How to delete a role?

Organize your teams with roles

How can I see my roles?

How to hold an election for an elected role?

How to create a Transversal role?