All Collections
Using Holaspirit
Working with Proposals
How to submit and track a proposal?

With Holaspirit, you can easily submit your ideas to your team using consent based decision making either in or outside a meeting (asynchronously).

Every time you sense that something could be better organized in some way, either via clearer roles, policies, domains or by removing one of those, you should submit a proposal to implement positive change.

⭐ Best practice: A proposal is deemed a good proposal if it meets a simple, single goal being to solve your tension.

Create a proposal and submit it outside a meeting

Submit a saved proposal from the Proposals app

Submit a proposal in a meeting

Create a proposal and submit it outside a meeting

If you don’t want to wait for your circle's next Governance meeting and wish to share a proposal to your circle, you can submit your proposal asynchronously. All circle members will get the opportunity to vote on your proposal. The proposal will be taken on if no member of the circle rejects the proposal or if the time limit for examining your proposal has been reached.

You can create a proposal two ways: 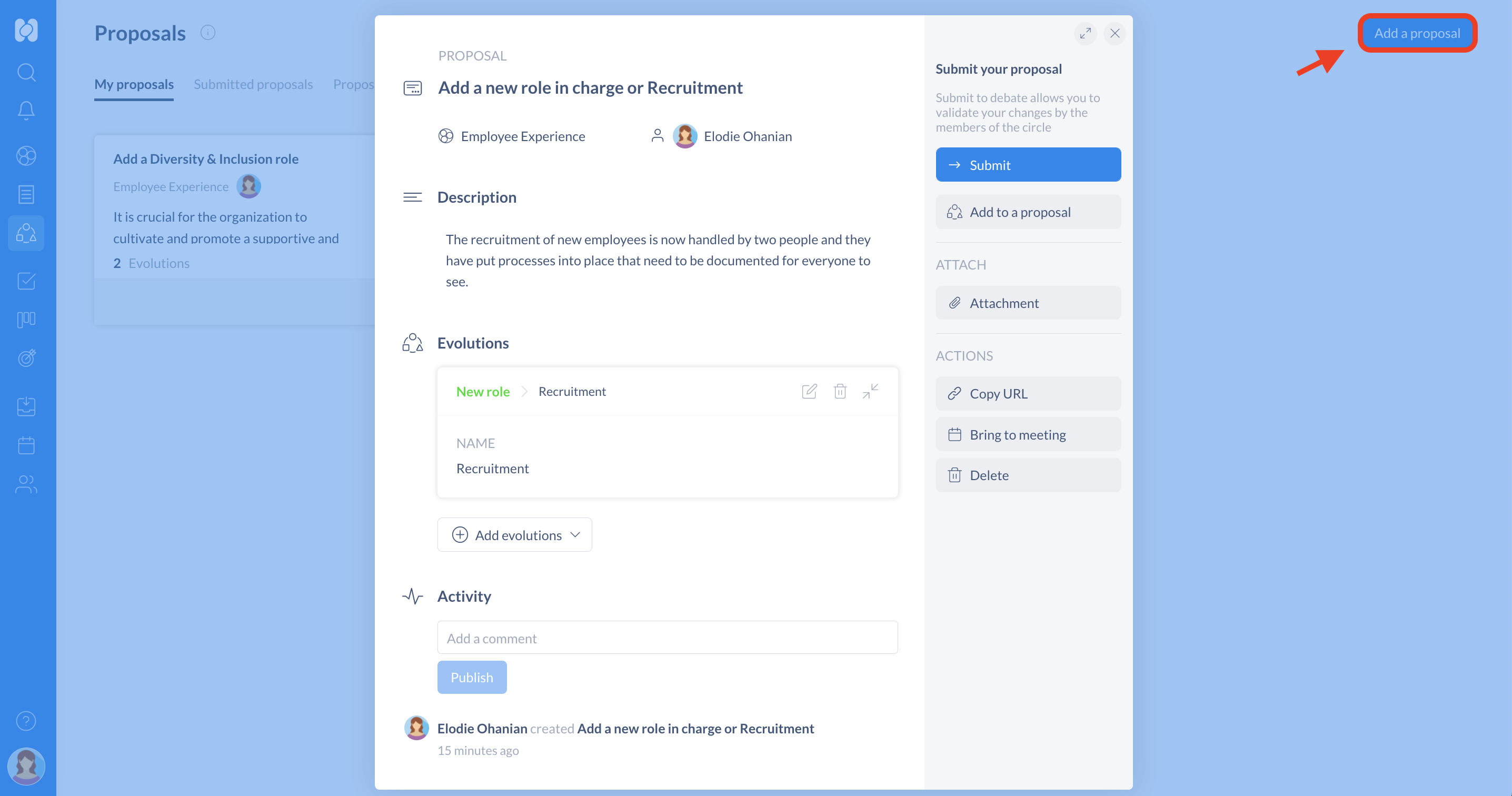 Once your proposal is created you can simply submit it to your circle for them to vote on your proposal and either validate or reject it.

Note: You can also choose tu use Inbox as a repository and to save your proposals in to submit them at a later time. To do so, click on Save as a proposal to save them in the dedicated app, edit and submit whenever you are ready.

Submit a saved proposal from the Proposals app

After creating your proposal, you might have chosen to save it in order to submit it at another time. You can find your saved proposals in the My proposals section of the Proposals app.

To submit a saved proposal:

Once submitted, the members of your circle will be able to vote on your proposal and either validate or reject it. You can track its progress in the Submitted proposals section.

Once a proposal is submitted, you can track its evolution in the Submitted proposals section of the Proposals app.

From Submitted proposals you can:

The circle members and yourself can also use the Activity section to comment on proposals, ask clarifying questions or make suggestions.

Submit a proposal in meeting

There might be some proposals that you'd like to discuss directly with your circle during Governance meetings.

To import your proposal to a meeting as an agenda item:

You will then be able to discuss the proposals with the participants of the meeting to decide together to either validate or reject it. If validated, the evolution will be implemented right after the meeting is closed.

How to remove or delete a proposal?

How to vote on a proposal?

How to add a proposal to a meeting?

How to use Bring to meeting?

How to set up consent based decision making for my organization?