All Collections
Managing roles and circles
Learn the basics
What is a role?

What is a role?

In Holaspirit, we switch to a new way of defining accountabilities and getting work done. Work is not divided among people but among roles with an inspiring purpose and clear accountabilities. Roles may be different from one organization to another depending on its context and its structure.

What is a role?

A role describes what you do in your organization, it represents your job or position. In Holaspirit, a single person may fill multiple roles at the same time, and a single role can be filled by multiple individuals unlike job description in traditional organization. Just as you are likely required to meet the expectations of your job, you would likewise be required to meet the expectations of all the roles you hold.

A role puts clarity on “who does what” and “who decides what”. People in an organization do not all have the same understanding of who should do what. This lack of clarity generally leads to inefficiencies, delays or even conflict. It is therefore absolutely essential that roles and accountabilities are defined as clearly as possible, in a documented manner.

Roles are defined by: 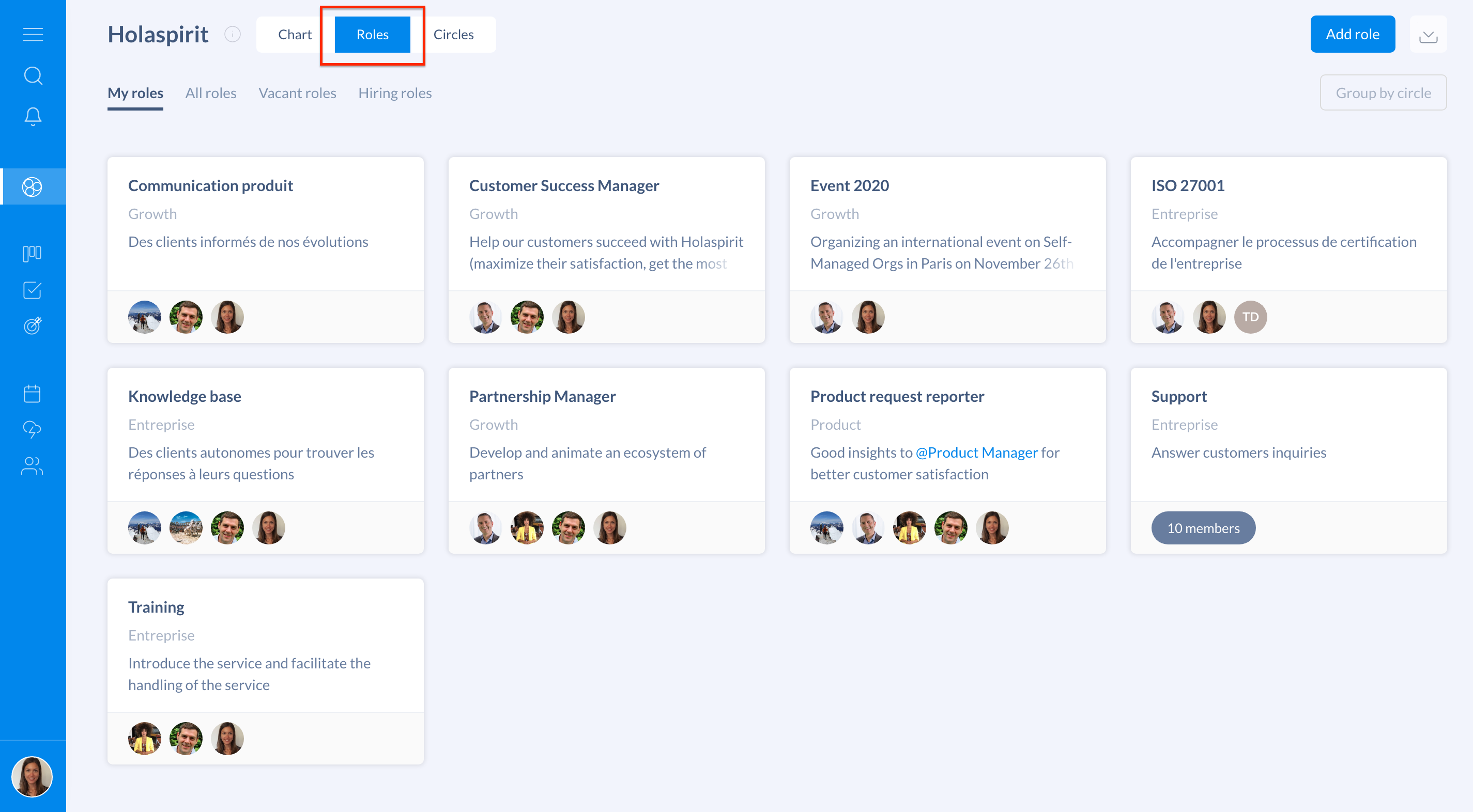 In short, Roles provide clarity and transparency on the accountabilities of everyone in the organization and allow you to delegate authority and free people's autonomy. It shifts from being a performer to being a contributor, able to provide the organization with what it needs to achieve its purpose.

How do roles work and interact with each other?

For the most part, roles interact with one another in the same way different positions would in any other organization. You mostly work with roles in your own circle (aka -  team), but you will often need to collaborate with roles in other circles.

There are a few Core Roles that stand out with how they operate and interact with other roles. Some of these Core Roles are elected, rather than being assigned like traditional positions.

There are also Core Members of roles. A core circle member takes part in the governance decisions of the circle. They can join a meeting, participate to the election process and suggest evolution for their roles and circles.

There may be instances where it does not make sense for a Member or a Role to be involved in the decisions of the circle. Typically if that member/role performs an insignificant task or does not spend much time involved in the circle. In these cases, the Circle Leader (or another role depending on the model applied in your organization) may opt to exclude these members as Non-Core members of the role or the Circle.

Who can assign members to roles?

By default, the Circle Leader has the power to assign individuals to roles within their circle and remove them. In Holaspirit, if you're an Admin of the circle, you are also eligible to assign roles.

Administrators can also customize how assignation are handled in the organization and change the role in charge of assignation in the circle settings.

Some roles are elected within the circle and cannot be assigned.

How do you apply for/resign from a role?

You will surely be called upon to take on new responsibilities within your organization.

Traditionally, according to Holacracy, it is Circle Leader who assign members to roles within their teams. Other roles can be configured as the Role in charge of Assignation.

As a member of the organization, you can express your interest in joining a role, apply and notify the Role in charge of Assignation of your application.

The Hiring Roles page gives you access to all the roles that are recruiting in your organization.

What decision(s) can a Role take?

Besides accountabilities, a role comes also with authority. It means that as a role filler you can execute any action you believe fits your role's purpose or accountabilities. This authority is defined by Domains and Policies for the Role.

As a Role holder, you have the full authority to take any next action you feel is right to take to fulfill the Purpose of your Role. However, you are not allowed to have an impact on a Domain owned by another Role, unless you are authorized to do so (by a Policy).

You can easily see the authority of a role and quickly identify if you are in a position to make a decision.

How to edit and update roles

Your collection of roles can change far more often than a job title ever does. Roles are often added, adapted and deleted on a weekly basis, which means your new cell-like ‘organization chart’ is never outdated. Here is how to create, modify, or delete roles.